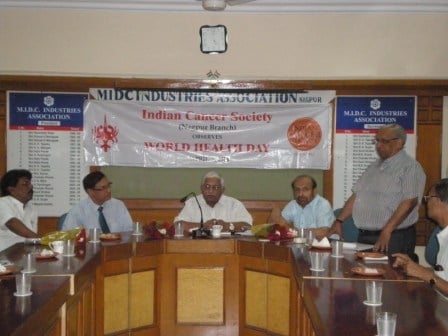 A programme on ‘Cancer Detection’ was held on 7th April, 2014 at 04:00pm at MIA House on occasion of ‘World Health Day’. Cancer Detection Society of India was represented by Nagpur Chapter Secretary Dr. Rathi, Joint Secretary Dr. Ajay Mehta and Member Dr. Manekar. President Shri Mayank Shukla welcomed the guests. Dr. Ajay Mehta gave a presentation on symptoms of Cancer and emphasized on advantages of early detection. As per information given by him 30% patients in India are having Cancer of Mouth or Tongue. The cause is chewing Tobacco and Smoking. Dr. Ajay Mehta explained that by the time the patient goes to doctor, he is already in stage-II or III. The reason is that people go to Pathologist for Blood Test or Lipid Profile but not to the Cancer specialist for checking of Cancer Symptoms. If the detection is done in stage-I or 0; life of the patient can be saved, but after stage–III or stage–IV the patient can survive for a short time that too with Pain & Agony. As per Dr. Mehta’s statement there are instruments available which can give warning of Cancer even two years in advance. Slides showing various types of Cancer were shown which really looked horrible. Dr. Mehta explained that the disease is going to increase in large percentage in India in both Male & Female.
He appealed that people should go to Mure Memorial Hospital where the Cancer Society is giving free check up facility. The reasons for spread of disease were because of lack of awareness about symptoms and no early detection. Pollution & Adulteration in food items was also an important reason. Lot of people are not aware of free check up & treatment by Cancer Society at Mure Memorial Hospital. Dr. Rathi advised all those present to sponsor for printing of posters for benefit of society. He said that all factory owners should procure posters & display in their respective factors for benefit of workers and staff.
He also advised that the society can hold such events at factories having strength of 25-30. Capt. C. M. Randhir proposed vote of thanks.
Prominently amongst those present in the programme were Shri Shekhar Bendre Treasurer, Shri C. G. Shegaonkar Jt. Secretary, Shri Shekhar Patwardhan & Shri Arun Lanjewar Executive Committee members of MIA. Social worker Ms. Kavita Padole acted as Coordinator between Cancer Society & MIA.